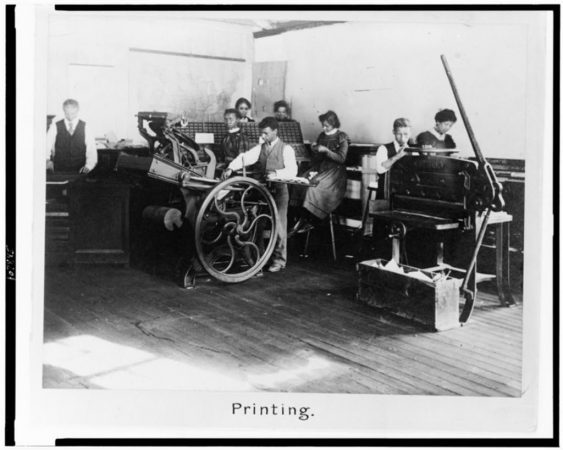 From William Howard Day’s Aliened American and Frederick Douglass’s Frederick Douglass’ Paper to the AME Church’s Christian Recorder, black newspapers emerged from black printing houses that were themselves spaces where we see not a solitary editor in his chair, but a multi-racial and multi-generational constellation of men, women, and children. We find Harriet Meyer’s editing (in shadow) Stephen Meyer’s newspapers, can trace Lucie Stanton’s (Day Sessions) social and economic capital, and glimpse Rosetta and Lewis Douglass’s formative years. At the same time, the debate over what it meant to be a black printer (then and now) was one among many terrains on which race, class, gender, and power were negotiated. I want to linger for a moment on the nineteenth-century “black press” as community hub, one as much a physical space for gathering as it was a space for disseminating black print. What were the stakes in Day’s defending his professional credentials against white condescension? What does it mean to talk about the nineteenth-century Black Press today? What lessons and challenges does that print culture offer for our own contentions with media ecosystems, state violence, black life, and freedom of the press?

Register to attend this free event:

Derrick R. Spires is Associate Professor of Literatures in English and affiliate faculty in American Studies, Visual Studies, and Media Studies at Cornell University. He specializes in early African American and American print culture, citizenship studies, and African American intellectual history. His first book, The Practice of Citizenship: Black Politics and Print Culture in the Early United States (University of Pennsylvania Press, 2019), traces the parallel development of early black print culture and legal and cultural understandings of U.S. citizenship. Considering a variety of texts by both canonical and lesser-known authors, Practice demonstrates how black writers articulated an expansive, practice-based theory of citizenship.

The book won the Modern Language Association Prize for First Book and the Bibliographical Society/St. Louis Mercantile Library Prize and was a finalist for the Library Company of Philadelphia’s First Book Award. His work on early African American politics and print culture appears or is forthcoming in African American Review, American Literary History, and edited collections on early African American print culture, time and American literature, and the Colored Conventions movement. Spires’s work has been supported by fellowships from the National Endowment for the Humanities, the Social Science Research Council, and the Mellon/Mays Initiatives.

Kyle Schlesinger, ed.:  A Poetics of the Press: Interviews with Poets, Printers, and & Publishers

Propelled Pasteboards, a blog devoted to the history of custom-printed playing cards (aka throwouts).

Eric Gill proofs and holdings at U. Florida